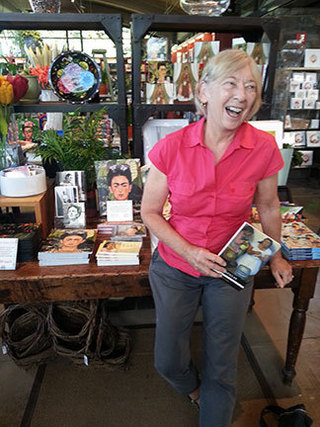 Before I was an author, I was a farmer in York County, Pennsylvania. Together, my husband and I owned Boar-Mor Farms, the farrowing and nursery component of swine production where over four hundred sows produced nine thousand piglets per year. Two miles from the commercial farm was the home farm, and here we built our house, raised two children and nurtured gardens and pets--cows, goats, sheep, rabbits, chickens, horses, burros, dogs and cats. It was a rich but demanding life style, and after more than twenty years we wanted a change. We sold the farm and headed west. I arrived at New Mexico State University in Las Cruces, New Mexico, across the border from Mexico, to study horticulture; I left to write about chile peppers, border crossings and Mexican fiestas. The environment, the culture, the political complexities were so intriguing that I simply had to write about my new world.

Initially, I wrote for magazines until my editor at University Press of Florida pitched an idea for a book, the history of tabloid valley in Palm Beach County, Florida, the home of the six major supermarket tabloids. At the New York Public Library I scrolled through microfiche issues of the 1950s gory New York Enquirer and poured over stacks of the transformed National Enquirer supermarket tabloid in the 1970s. I was hooked; what was the story behind the tabloids?

My present book draws me back to the culture of Mexico and the Southwest. Several years ago I worked one day as a temp employee in an immigrant neighborhood tortilleria, bordered to the south by the village of Anapra, Mexico; to the east, El Paso, Texas. The most I knew about tortillas is that they tasted good from a taco truck in New York City and best at the borderlands, handmade and warm off the griddle. I was curious. Who made the first tortilla? Where did the tortilla come from? What is an “authentic” traditional tortilla? Tortillas: A Cultural History, published by the University of New Mexico Press, is a book about the history of the tortilla, from its roots in ancient Mesoamerica to the cross-cultural global tortilla.