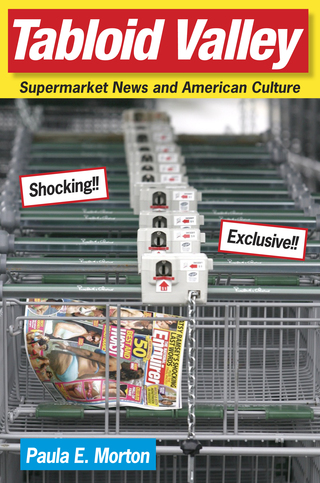 "ELVIS IN HIS COFFIN – THE LAST PICTURE"

Author Paula E. Morton reveals what went on behind the scenes of these legendary tabloid front page stories in Tabloid Valley: Supermarket News and American Culture.

Morton spent two years interviewing reporters, editors, and other sources to find out how the tabloids work, where they get their stories, and how they have changed American journalism. In the sixties and seventies The National Enquirer was almost alone in bringing sensational journalism to the masses. Today pop culture news is everywhere – in the New York Times, the major networks, regional dailies and the internet.

And the tabloids played a huge part, for good or bad, in this revolution. Morton tells how this happened in this book. She befriended the tab men and women, attended their get-togethers in Florida's tabloid valley – such as the wake for the Weekly World News in 2007 – and got them to open up about their methods and the way they work.

“Paula gets it right,” said former Enquirer reporter Jim McCandlish. “She dug and dug and produced a great book.”

The book opens with the birth of the Enquirer in New York, its rebirth in south Florida – and how other tabloids followed to form Tabloid Valley, stretching from the tiny working class town of Lantana 18 miles south to posh Boca Raton.

Morton reveals how Generoso Pope, the Enquirer's eccentric founder, devoted his entire life to the paper and why he preferred British-trained journalists who first dominated all the tabs. She dishes up inside info on Star magazine, Globe, Examiner, Sun and the outlandish Weekly World News with its headlines about Elvis being alive and the Loch Ness monster being captured. She reveals the huge amounts of money splashed around by the tabloids to bring in some of their blockbuster stories, the big salaries and lack of security attached to the journalists' jobs.

“Paula isn't a tabloid journalist and so was able to bring a clean outsider's view to the book,” said former Enquirer editor Malcolm Balfour. “She captured the essence of it.”

Tabloid Valley contains dozens of photographs, including – you guessed it – Elvis in the coffin. If tabloids are your bag, this book is obviously for you. If not, you're still guaranteed a fascinating inside look at the offbeat journalism that changed American culture.